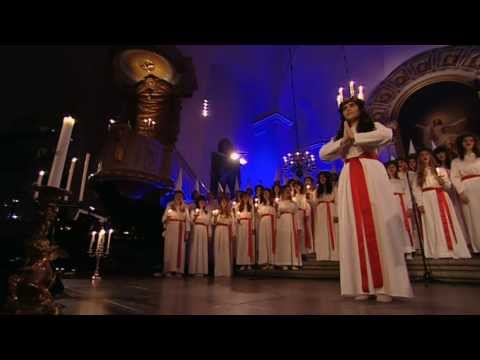 You have opened window number 13!

Today we’re sharing a beautiful Christmas tradition carried out in the cold and dark land of the Swedes. The 13th of December marks the Christian feast known as St Lucy’s Day, or as the Swedes simply call it; Lucia. St Lucy’s Day is celebrated most commonly in Scandinavia and in Italy, but here we’ll be focusing on the tradition of Lucia and the way it’s celebrated in Sweden.

Saint Lucy was a 3rd-century martyr under the Diocletianic Persecution who according to legend brought food and aid to Christians hiding in the catacombs. She used a candle-lit wreath to light her way through the catacombs and leave her hands free to carry as much food as possible. There are different versions of how the Swedish Lucia came to be, we won’t dwell too much on it, but it’s safe to say that it’s a mixture of folk belief, legend and historic facts.

Lucia is celebrated throughout Sweden and schools, companies and churches are visited by a Lucia parade (Luciatåg), much like the one in the video above. The members of the parade sing traditional Swedish Christmas songs as the music is a fundamental part of the tradition. In pre-schools and elementary schools children are engaged in creating Lucia parades and singing the Lucia songs.

An important part of the Lucia celebration are the nibbles served, what Swedes refer to as Lussefika. Traditionally Lussefika consists of Swedish saffron buns, gingerbread and of course Glögg, Swedish mulled wine, mandatorily served with raisins and peeled almonds.

Where to see Lucia

You can see the Swedish Lucia in London usually from the beginning to the middle of December.  The Swedish Church in London arranges several events over a 2 week period, these events are very popular and sell out months before the events.

If you’re interested in catching Lucia this year in London, there are still some tickets left for the Lucia Nights at the Asylum Chapel, tomorrow Thursday the 14th of December.

And if you can’t make that, we suggest that you at least have some Lussefika and Swedish saffron buns at Bageriet in Covent Garden.

Get A Live VideoBoiler Quote

If something is wrong, use Clipfix to solve the problem yourself

Available on iOS and Android